If you are a land owner or developer in Wanneroo you should be aware that the City of Wanneroo has recently adopted a new planning policy that requires developers in the area to assess their land for the presence of karst (subterranean voids and pinnacles).

The areas at risk are identified in the policy and are reproduced on the map below. 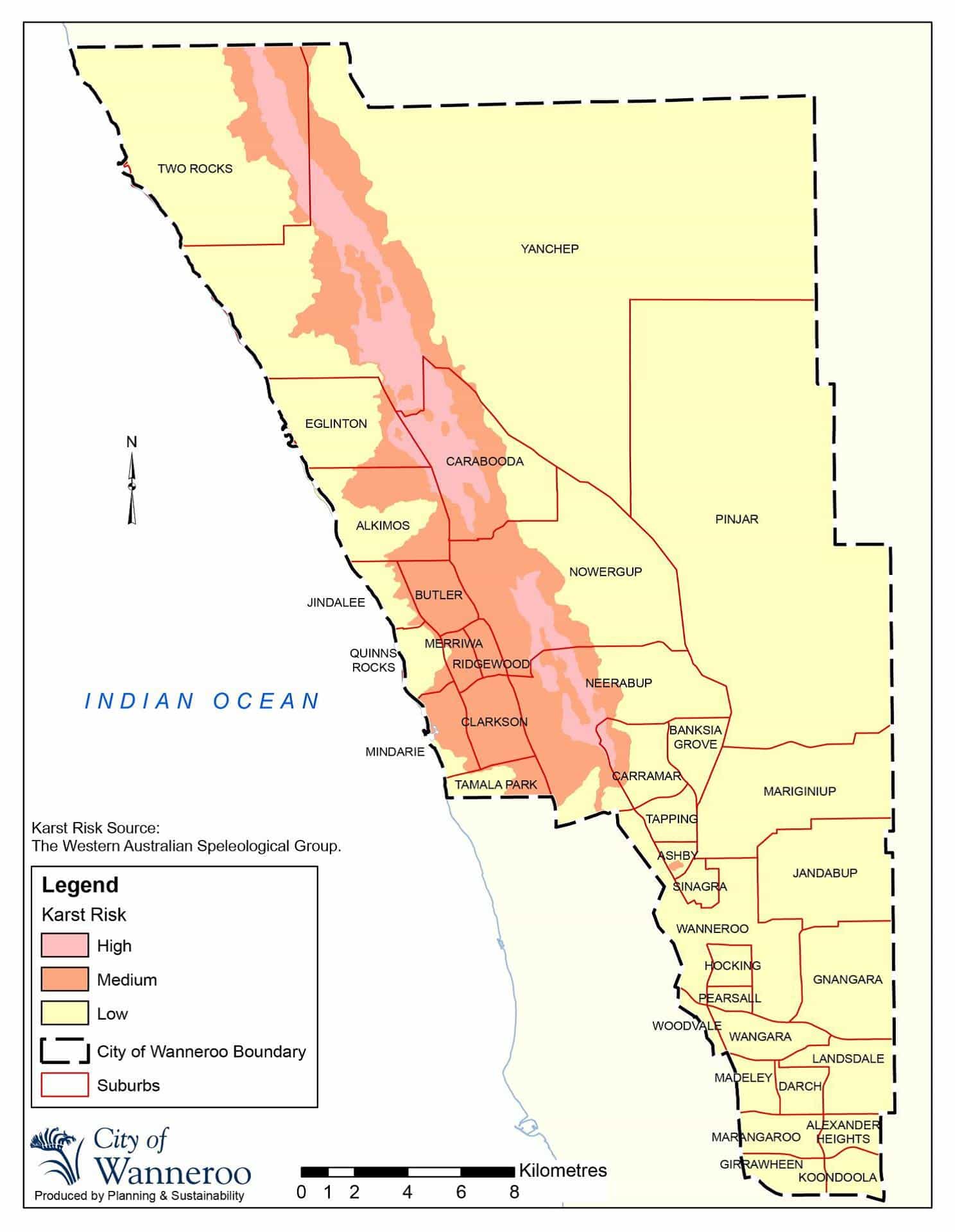 Karst is a term used to describe landforms that have developed by dissolving limestone or other soluble rocks. These landforms are characterised by sinkholes and subterranean voids. Karst also includes solution pipes and collapsed caves.

All of these features can be found within the City of Wanneroo, where groundwater and rainfall has dissolved calcium carbonate from the porous Tamala Limestone. In some areas, these features may be hazardous and can result in personal or structural damage to private property, roads and houses. The hazards associated with karst include the risk of subsidence or dislocation related to the collapse of subterranean voids or damage due to differential settling. Other hazards associated with karst include constraints resulting in increased building and infrastructure costs due to the presence of sub-surface features such as pinnacle fields, caves or loose sands and a higher potential for groundwater pollution.

If you are contemplating developing land within the medium or high Karst risk zones some up front karst assessment work is advisable as it has been found in the past that these areas are not necessarily as restrictive to development as they first appear. Some of the high risk areas mapped in the Two Rocks region for example have transformed over time to a state where Karst is no longer a constraint on development.

Aurora Environmental has developed an excellent understanding of karst in Western Australia and particularly within the City of Wanneroo, having undertaken numerous karst investigations over the past 15 years. Aurora has the capability to conduct desktop investigations, detailed site investigations, drilling in areas of high risk, and innovative, deep ground probing radar surveys when necessary, to identify underground features, without the need for intrusive investigations. Karst Landform Management Plans can be prepared when necessary, so that developments can proceed in areas of known karst.

Staff at Aurora Environmental have a detailed understanding of the geology of the Perth Metropolitan Region and can provide cost effective development solutions for land that is constrained by the presence of Karst. For further information look at the service offering on our website (Aurora Environmental Karst Investigations).

If you require assistance in this regard, contact Dr Mark Shepherd on (618) 9227 2600 or by email on mark.shepherd@auoraenvironmental.com.au.